There were a few talking points at last night’s (22/2/2015) 87th Academy Awards, which took place in the Dolby Theatre in Hollywood, Los Angeles. The celebrities proved that the Oscars is more than fashion and winning awards. It is a platform for the stars to be vocal about important issues.

Prior to the Oscars, actress Reese Witherspoon and other A-listers showed support for The Representation Project’s #AskHerMore initiative, which asks journalists to ask female celebrities about more than their outfits on the red carpet. Reese took to Instagram to help promote the campaign,  I love this movement #AskHerMore..have you heard of it? It’s meant to inspire reporters to ask creative questions on the red carpet. I love the Oscars AND fashion like many of you – & am excited to share #WhoAmIWearing later tonight. But I’d also love to answer some of these Qs….And hear your suggestions?! (Share em below!) There are so many amazing, talented nominees this year..! Let’s hear their stories! Spread the word.’ 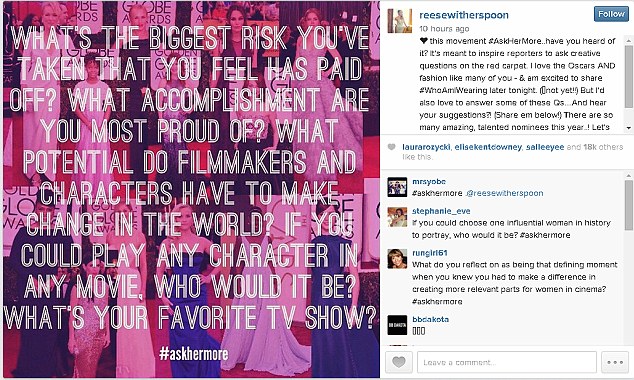 Neil Patrick Harris, who hosted this year’s awards, said, “Welcome to the 87th Oscars. Tonight we honour Hollywood’s best and whitest — sorry, brightest” blasting criticism of the Hollywood system, drawing attention to the awards’ lack of diversity and how majority of the nominees were white. While the awards was on, civil rights groups staged a protest outside and were vocal about how “white wash” this year’s show was, with all 20 acting nominees were white.

It was the night to be vocal about important issues! Graham Moore, winner of Best Adapted Screenplay for The Imitation Game, announced he had attempted suicide at 16 because he felt “weird” for being gay. “This is for that kid who feels like they don’t fit in,” he said: “Stay weird, stay different.”

Patricia Arquettes spoke about gender equality in her acceptance speech for Best Supporting Actress, which has become one of the major talking points of the night. In her speech, Patricia stated “To every woman who gave birth, to every taxpayer and citizen of this nation, we have fought for everybody else’s equal rights. It’s our time to have wage equality once and for all and equal rights for women in the United States of America.” Her speech received huge appreciation from Dame Meryl Streep, who showed her support about the speech, along with Jennifer Lopez.

Eddie Redmayne made an emotional speech after he won his Oscar for Best Male Actor. He dedicated it to “all of those people around the world battling motor neurone disease”.

Twitter went into overdrive after Joan Rivers was noticeably absent from the in The Memoriam Montage.

Jennifer Lopez wore a Elie Saab gown with a Salvatore Ferragamo clutch, Neil Lane jewels and Giuseppe Zanotti shoes. She looks like a princess. I want the dress. 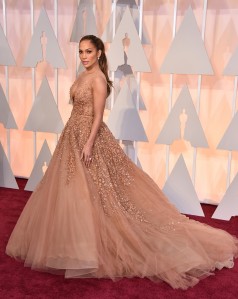 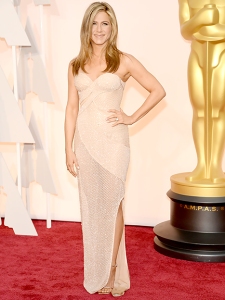 Rosamund Pike must of took my advice after the Globes and sacked the stylist because she has got it so very right every time since on the red carpet. Rosamund wore Givenchy with Lorraine Schwartz jewels. 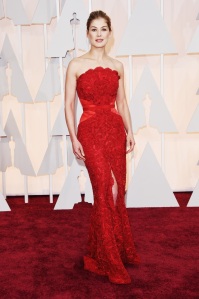 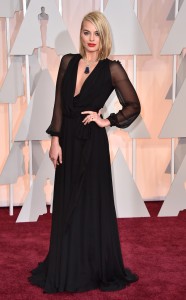 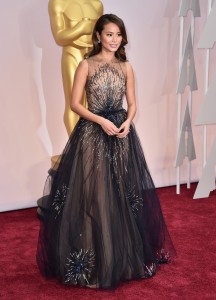 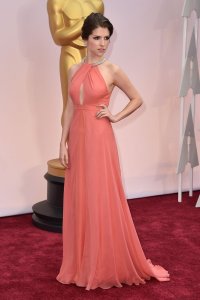 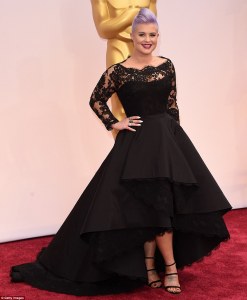 Eddie Redmayne & Ansel  Elgort both wore the same suit! Both men looked extremely dapper but I can’t inform you who they are wearing as no one seems to ask who the men wear 🙁 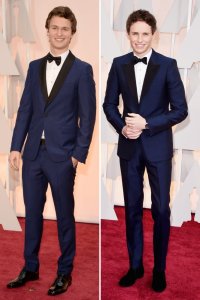 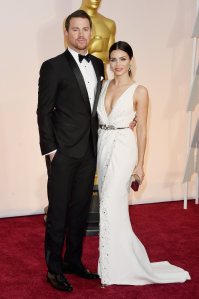 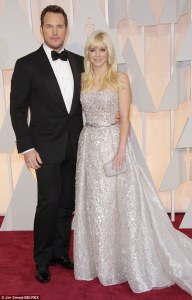 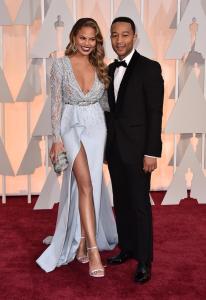 Keira Knightley, I know you are pregnant, but it doesn’t mean that you can relax on the fashion front! This Valentino dress is … quite something. But not red carpet style. 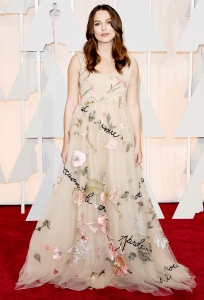 Nicole Kidman’s chartreuse-fading-into-pink dress does nothing for her, the shimmery fabric washes her out and the red belt is pointless. 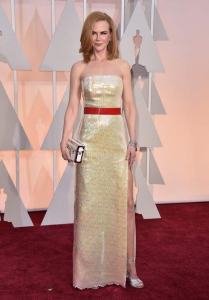 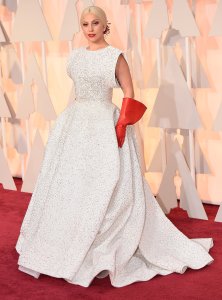 Solange is usually the one making Grade A fashion choices but at the Oscars, she got it wrong in the crimson Christian Siriano design. 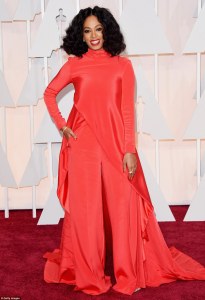 Pale pastels and white seemed to be the go to colour for the Oscars Red Carpet this year, with over 25 dresses in those shades.

Eddie Redmayne — The Theory of Everything

Achievement in Makeup and Hairstyling

Oh and how could I forget, Lady Gaga stole the show with her tribute performance to the Sound of Music. Gaga ditched her usual out there theatrics for a toned down, beautiful 50th anniversary tribute and she even hit all those high notes Julie Andrews’s hit.

Grammys 2015 – Who won what, Best & Worst Dressed and the performances!

@sarahjanevlogs
•
Follow
TW: photo of scars included First day back to work today post surgery and I’m very happy to be back! I’m excited to get into a routine again and have something to focus on 💃🏼 I won’t lie, I am struggling to get comfortable while sitting up at a desk again so I will probably be alternating between my desk and my bed desk for a while until I can get used to sitting properly again. My abdominal swelling had gone down significantly last week but I’m a small bit swollen again however I’m putting that down to the fact my period is due 🫠 I’m a little bit anxious about my this period as it will be my first one since my surgery and it’s always so painful. Here’s praying it won’t be too bad. Sadly, my acne is still very sore & painful and is making me very insecure. I had to put a lot of make up on today just to cover it up 😬 I am hoping that over the next few weeks, everything will start to settle down properly and I’ll start feeling like myself again 🙏🏻 I have added a photo at the end of my stomach without dressings on it - my incisions are very dainty (THANK THE LORD/SURGEON) but sadly my belly button is just a bunch of scars now… I still have stitches in some of the incisions and I have a habit of scratching my stomach without knowing when I do eventually sleep so I keep the dressings on to prevent any issues happening 😬 I have my follow up appointment with my surgeon in two weeks time & I’m looking forward to hearing in more detail what happened in the surgery! #endo #adeno #endometriosis #pcos #adenomyosis #endoireland #operation #health #irishblogger #irishvlogger #chronicillness #laparoscopy #acne
View on Instagram |
1/9

@sarahjanevlogs
•
Follow
2 whole years of loving you @declan946 ❤️ Thank you for showing me what true love is, for making me laugh in moments where I want to cry, for caring for me on days when I’m suffering, for being my biggest supporter and for always being there for me. You truly are one in a million and I’m so very blessed to have you in my life. Happy anniversary, I love you xx #anniversary #love #couple #happiness
View on Instagram |
2/9

@sarahjanevlogs
•
Follow
Just wanted to give you all a little post op update: I made it back home to Lovely Laois yesterday 🙌🏻 I’m incredibly sore and in a lot of pain but so far, it’s all just post surgery pain which I’ll take any day over the pain I’m usually in. I spoke with my surgeon before leaving the hospital and he was just so shocked I was able to function for the last few months with the pain due to everything he removed. I had a big polyp in my uterine wall that was attached to my right ovary which was attached to my abdomen wall. I also had a 5cm cyst which was on the verge of rupturing. He said all my organs were basically stuck together with adhesions so no wonder I was in so much agony, especially when trying to pee (I would almost pass out every time I went to the bathroom due to the pain, just ask Declan - he’d often find me crying with the pain) The doctor is very confident that I’ll be getting relief from this surgery. But that does not mean I will be better. That’s the thing with chronic illnesses, I’ll never be better (unless a cure is discovered). These surgeries are part of treatment to give me some relief 🥺 Once again, thank you for all the love you’ve been giving me in regards to my operation, it means so much to me & I appreciate it 💛💜💙 P.S incase you didn’t already know this, but yes, Thumper is my favourite Disney character and yes, I am wearing Thumper pj’s 🐰 #endometriosis #pcos #adenomyosis #endoireland #operation #health #irishblogger #irishvlogger #chronicillness #laparoscopy #home #laois
View on Instagram |
3/9

@sarahjanevlogs
•
Follow
*Apologises for the not so glam Instagram photo and if this photo upsets anyone* Today, I had my 10th laparoscopy / 12th operation for my Endometriosis, PCOS Adenomyosis… my 3rd surgery in Birmingham. Once again, I traveled to the UK because the treatment I need so I would be in less pain is not available in Ireland. Today, as well as the usual excision laparoscopy procedure, it was planned to have anti-adhesion injections inserted into both ovaries with the hope it would reduce the amount of adhesions my ovaries produce. It is becoming a very sad reality that my life is just surgery after surgery to get relief and to feel somewhat like a normal 28 year old woman. It’s sad that I’m not even phased at the fact that I needed to have yet another surgery to get relief. I’m unsure as to what was found/done yet as but I met my doctor in recovery and he said I will feel a lot more comfortable now. It was a long surgery, over 3 hours, so he obviously done a lot. I briefly heard my nurse mention adhesions, cyst and polyp but once I understand more, I’ll update you all. I’m currently in pain and uncomfortable but I’m doing ok - no morphine pump this time! As always, I will do my best to keep everyone updated on my progress over the next few weeks 💪🏻 #endometriosis #pcos #endoireland #operation #health #irishblogger #irishvlogger #chronicillness #laparoscopy #thisisendometriosis #adenomyosis
View on Instagram |
4/9

@sarahjanevlogs
•
Follow
Nowhere I’d rather be than travelling the world with you ❤️ Our New York adventure is coming to an end but I managed to make @declan946 fall in love with the city so I know we will definitely be back! #nyc #newyork #newyorkcity #travel #adevnture #couple #holiday #USA #america #theedge #brooklynbridge #centralpark #topoftherock
View on Instagram |
5/9